“Generic drug prices are rising at a greater rate than I have ever seen in my 20-year career.  Price gouging in the specialty drug market is especially acute and outrageous. Make sure you ask my team to help you find the best prices – we have tons of pre-negotiated cash prices and resources at our fingertips.”

The emerging issue in health care is drug costs — despite the fact that most people say they can afford their drugs and greatly value the role drugs can play in making their lives better. One likely reason this is the case: Drug costs are the first thing people think of when they think of the growing out of pocket costs they are paying for health care, at a time when their wages have been relatively flat.

In our Kaiser Family Foundation polling in April, surprisingly, “making sure that high-cost drugs for chronic conditions are affordable to those who need them” emerged as the public’s No. 1 priority for President Barack Obama and Congress, with 75% of the public saying it should be a top priority, far ahead of various other Affordable Care Act issues. “Government action to lower drug prices” was No. 2, picked by 60 % of the public and by 51% of republicans. (Respondents could choose multiple top priorities.)

Then, in our August polling, we asked which health costs people with health coverage find to be the greatest burden. As the chart below shows, deductibles led a closely bunched list, followed by premium payments, drug costs and doctor visits. Deductibles have been rising steadily each year, especially for people who work for smaller employers, as insurance has gradually been moving from more to less comprehensive, with more “skin in the game” for consumers. 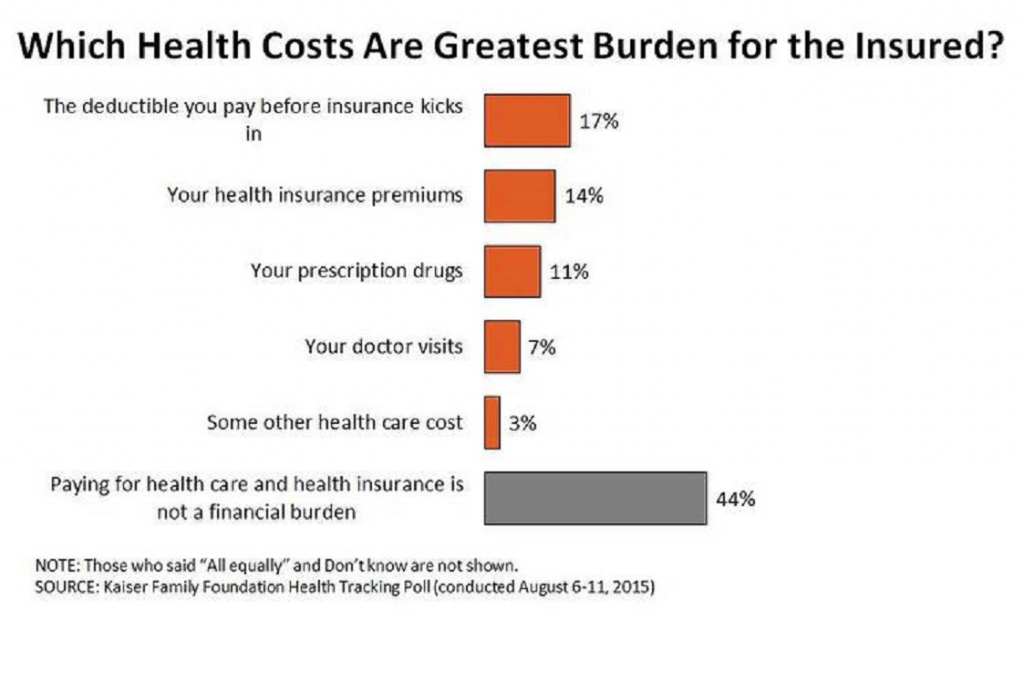 You might think people prioritized action on prescription drugs in our poll because they have been hearing about high drug costs in the news. But that doesn’t appear to be the case, with only 5% of the public reporting that they followed stories about expensive treatments for hepatitis C very closely and 6% saying the same about new cholesterol drugs. Instead, personal experience seems to be driving people’s impressions. Over half of the public reports taking a prescription drug, and almost 40% of those people report taking four or more drugs.

And while most people say they can afford their drugs, sick people and people who use more drugs are much more likely to report problems paying for drugs, or that they or a family member have had to skip doses or cut pills in half to make prescriptions last longer. Seventy-six percent of the public blames drug companies for high drug prices – with just 10% blaming insurers. The public ranks the pharmaceutical industry right between the oil industry and insurance companies in overall favorability.

The result is that people favor virtually any action we poll on that they believe might reduce drug prices.

Drug spending represents just 10% of overall health spending. But the number of transactions people have with the health system is much larger for drugs than for physician visits or hospital stays or other services–and the cost is very immediate and tangible. Concern about drug prices is best understood as the tip of the iceberg of a larger concern consumers have about out-of-pocket costs. It’s an example of a basic rule of health policy: Experts think more about national and government spending for health while people focus more on health care as a pocketbook issue.